WHere are they now??  NCWA Alumni highlights

Name: Thomas Joseph Lawlor IV
College/ University: University of Central Florida
Graduation Year: 2005
Highlights: After earning three NCWA National Titles and earning a degree in Social Science Education, Lawlor spent one year teaching before beginning his MMA career with the UFC. Lawlor began his career with UFC on the TV show The Ultimate Fighter.  In his 5th year with the UFC, Lawlor has become a top 185 lbs. fighter.  In 2010 Lawlor was inducted in to the NCWA Hall of Fame - Circle of Champions.  He was the first NCWA 3X National Champion at 235 lbs.

Name: Scott Fike
School: Bridgewater College
Graduation Year: 2013
I was the Founder of the Bridgewater College Wrestling Team in 2011. I coached the team and competed in the NCWA in 2012 and 2013 at 174 lbs. and qualified for Nationals both years. I went on to graduate with a bachelor’s degree in health and physical education and I’m currently teaching and Coaching Wrestling at Cave Spring High School in Roanoke Virginia.

Name: Scott Robbins
School: University of Michigan - Ann Arbor
Graduation Year: 2013
After graduating in the spring of 2013, I moved to Pennsylvania to begin a MBA program at Penn State University. I am concentrating in marketing and supply chain management, hoping to work in either a brand management or consumer insights research role.
Apart from school, I have remained active by running some half marathon and 10k races and wrestling when I have the opportunity.

Name: Andy Keppley
College: Maranatha Baptist Bible College
Coached by: Ben Peterson
Graduation Year: 2002
Following graduation from MBBC as a 1999 NCWA National Champion (and NCCAA National Champion), Andy was Coach Ben Peterson's assistant coach for two years at MBBC.  For the past 12 years Andy has been working construction with his family and coaching at Conrad Weiser Jr. High and High School.  He worked with the Jr. HIgh School for 7 years before taking over as the varsity high coach.  Conrad Weiser is located in Robesonia, PA.

Name: Clay Goodloe
College/ University: Newman University
Graduation Year: 2009
I'm the Head Wrestling Coach at Creekview High School in Carrollton, TX. I also teach social studies special education courses at the school. Last year our team had a great season finishing 8th in the state. We had our schools first state finalist and the most amount of state qualifiers and placers in a season. I received coach of the year last year for the teams accomplishments. 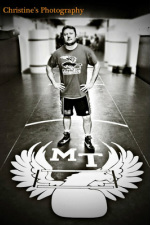 Name: Bryan Knepper
College/ University: University of Toledo (1997-2004), Middle Tennessee State University (Head Coach, 2007-2013)
Graduation Year: 2001, 2004
Highlights: Knepper was the founder of the University of Toledo wrestling program within the NCWA in 1997 after the NCAA program folded in 1994. He wrestled in the 133 - 157 weight classes in the earliest versions of the league when National competition hadn't fully developed.  After being elected to the inaugural class of the NCWA Hall of Fame in the "Founders Club", Knepper went on to help build a program at Middle Tennessee State University that has finished in the top-20 of NCWA Division 1 several times.  MTSU is recognized as one of the first non-traditional wrestling programs to offer scholarships for wrestling through the 501c3 MTSU Wrestling Foundation started by Knepper in 2010.  He recently retired as Head Coach at MTSU and lives with his wife Sarah and their 3 kids, Gabriel, Shelby, and Jonah near Columbus, Ohio.  He still serves as the NCWA Quality Enhancement Director and the Mid-Atlantic Conference Commissioner.

Name: Jason Balma
College/ University: University of Central Florida
Graduation Year: 2005
Highlights: After graduating from UCF with a degree is Social Studies Education, Jason began coaching the UCF program and completing his master's degree in Education.  Balma coached the program for 7 seven years, including the 2010 National Championship team.  Balma was also part of the two-time national championship team at UCF, earning All-American status twice.  Jason now lives in Alexandria, VA and is coaching at Annandale High School in addition to teaching Civics.  Jason continues to serve the UCF program as a director and also serves the role of NCWA Alumni Director.

Name: Dr. Robert Hines
College/ University:  Texas A&M University
Graduation Year: 1977
Highlights: Bob is today one of the top Orthopedic Surgeons in Oklahoma. Dr. Hines has been the official team doctor for University of Oklahoma wrestling for almost 20  years. Bob is also the official traveling doctor for the US Olympic team. He remains active in the rehabilitation of wrestling injuries, specializing in knee and shoulder surgery.